Shadows are a great way to add realism to your games. However, dynamic (realtime) shadows, can come with a significant runtime performance cost. For a more performant way of adding static shadows to your scene. See Lightmaps.

The PlayCanvas engine implements a shadowing algorithm called shadow mapping. It is completely cross-platform and so is guaranteed to work on both mobile and the desktop. Furthermore, shadows are free for everybody to use - you don't need a Pro account to make your game look great. 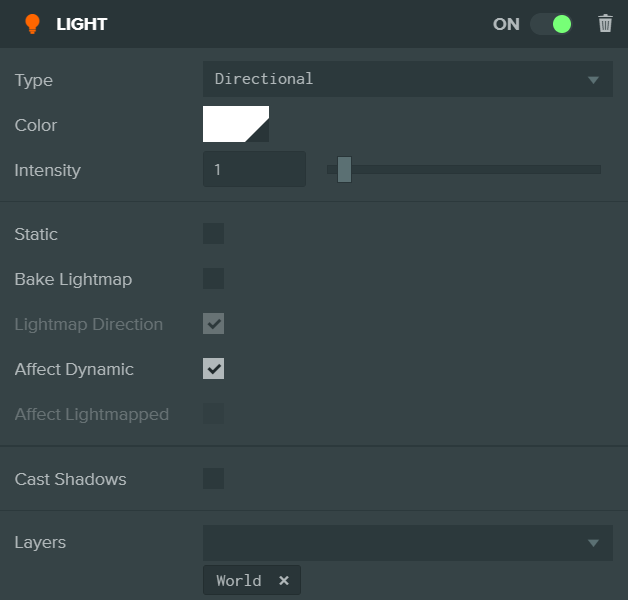 By default, shadow casting is disabled in PlayCanvas. You have to explicitly enable it yourself. Fortunately, enabling shadows is easy. First of all, identify which lights in your scene you want to cast shadows. Select the lights in the Hierarchy to edit their properties in the Inspector panel. Every light has a 'Cast Shadows' option. Simply check this option for the light to generate shadows for shadow casting graphical objects in your scene. 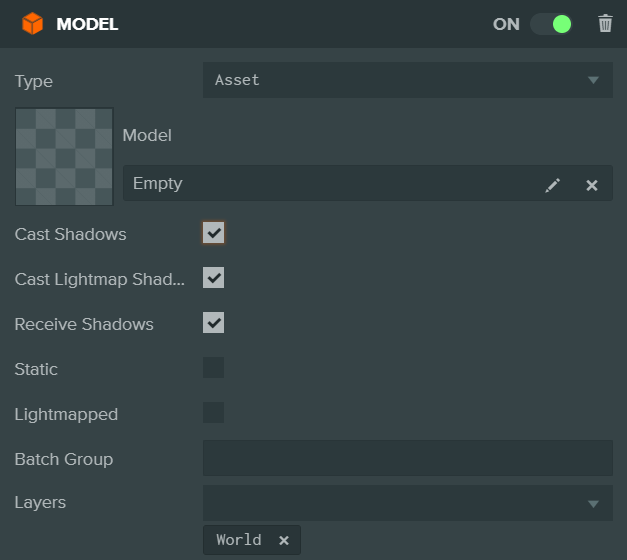 Now you need to specify which graphical objects in your scene cast and receive shadows. By default, all model components receive shadows but do not cast them. Therefore, in order to see an entity cast shadows, select it in the Hierarchy, locate the model component in the Inspector and check the 'Cast Shadows' option.

Shadows should now be visible in the Editor's Viewport.

The shadow mapping technique used by PlayCanvas has only finite resolution. Therefore, you may need to tune some values to make them look as good as possible. The following properties can be found in the Light Component UI.

The shadow distance is the distance from the viewpoint beyond which directional light shadows are no longer rendered. The smaller this value, the crisper your shadows will be. The problem is that the viewer will be able to see the shadows suddenly appear as the viewpoint moves around the scene. Therefore, you should balance this value based on how far the player can see into the distance and generally what looks good.

Every light casts shadows via a shadow map. This shadow map can have a resolution of 256x256, 512x512, 1024x1024 or 2048x2048 and this value is also set in the light component's interface. The higher the resolution, the crisper the shadows. However, higher resolution shadows are more expensive to render so be sure to balance performance against quality.

Shadow mapping can be prone to rendering artifacts that can look very ugly. If you notice bands of shadow or speckled patches where you do not expect, you should try tuning the shadow bias to resolve the problem.

'Shadow acne' artifacts are a big problem and the shadow bias can eliminate them quite effectively. Unfortunately, this always introduces some level of 'Peter Panning', the phenomenon where shadows make a object appear to be floating in mid-air.

The Normal Offset Bias solves this problem. In addition to using the depth bias, we can avoid both shadow acne and Peter Panning by making small tweaks to the UV coordinates used in the shadow map look-up. A fragment's position is offset along its geometric normal. This "Normal Offset" technique yields vastly superior results to a constant shadow bias only approach.

The outline of a shadow is called the penumbra. This is a transition from dark to light which gives shadows a soft edge. Softening shadow edges is the default in PlayCanvas but you can change this setting if you wish to achieve hard edged shadows. See below for a comparison of soft and hard edged shadows:

Soft shadows are achieved by performing more samples of the shadow map on the GPU. The algorithm used is called Percentage Closest Filtering or PCF for short. This algorithm reads 9 localized samples (a 3 by 3 matrix) from the shadow map instead of just one as is used for hard shadows.

The shadow sampling type is specified per light and so the option can be found in the Light Inspector.