Layers allow you to customize the render loop for your application. Using layers you can implement some advanced rendering features. For example:

A PlayCanvas application is created with a default set of layers which are always present. You can create your own layers and re-order them to suit your particular requirements.

At a fundamental level a layer is list of meshes to render. Each layer is divided into two sub-layers: Opaque and Transparent. When a mesh is added to a layer the layer stores it in one of the two sub-layers, depending on whether the material on the mesh needs to render transparently or not. This is because transparent sub-layers are often sorted differently than opaque sub-layers.

There are three factors that determine the order in which meshes are rendered.

Priority of the camera is the main factor that controls the order in which the meshes are rendered. Each camera has a priority assigned to it, and cameras with smaller values for priority are rendered first.

Each camera also has a list of layers set up on it, which controls which layers the camera renders. Their order is described in the next section. 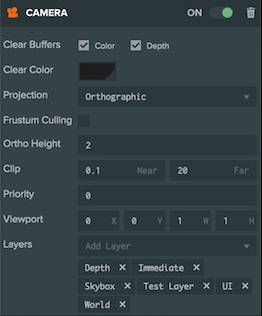 Next is order of layers in the application. Each application contains a pc.LayerComposition object which is available in your application as this.app.scene.layers. The layer composition determines the order of all sub-layers. The ordering is based on the sub-layer not on the layer so that you can, for example, render all the opaque sub-layers first, then all the transparent sub-layers afterwards.

Note: Putting a model component inside a layer that is rendered after the world layer will not make the model render on top of everything in the world layer! The Standard Material used to render models has a property called depthTest. When this is true (the default) before each pixel of the model is rendered the GPU will test to see if there is something else in front if this pixel. Even if that pixel was drawn in an earlier layer depth test ensures that only visible pixels are drawn. If you wish to ignore the distance from the camera when rendering a mesh, disable depthTest in your material.

Each sub-layer has a sort mode. Every frame the meshes in a sub-layer are sorted according to its sort mode. This determines the order that the meshes are rendered in when the sub-layer is rendered.

PlayCanvas applications are created with a set of default layers. You should leave these layers in place as some engine features will not function correctly if they are not present. They default order is below: 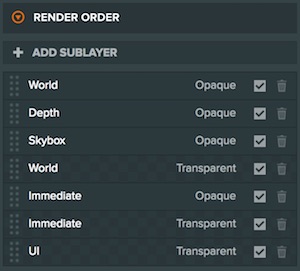 The default layers are great for implementing the existing engine features but the real power comes from creating your own layers to customize the order in which your content is rendered.

Layers are controlled from the LAYERS panel in the Settings section of the Editor.

In the Layers section, type in the name of the layer that you wish to create and click Add Layer. Your new layer will appear in the list of available layers below the button. 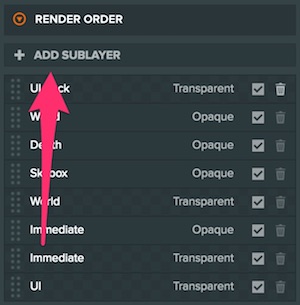 Add a sub-layer to the layer composition by selecting ADD SUBLAYER and choosing which sub-layer you wish to add. Once your layer is in the Render Order list you can re-arrange the order by dragging each sub-layer up and down. 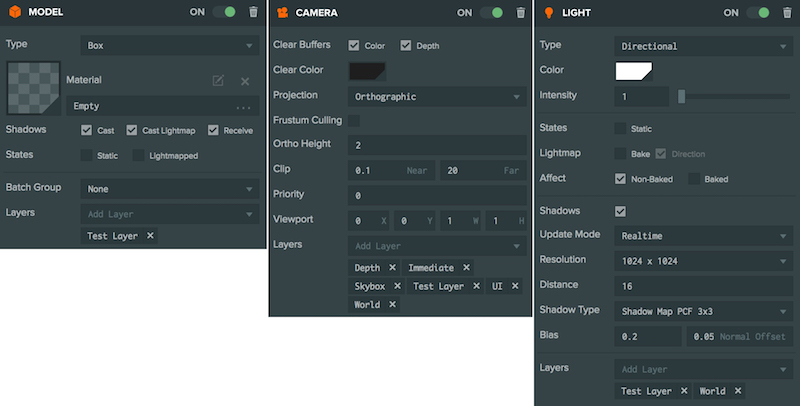 Your scene typically contains many entities, which render meshes. It is recommended for each of these to be on exactly one layer. In most cases, these would be on the World layer, but for more control, you can assign them to layers such as Terrain, Buildings, Characters.

A new scene by default contains a single camera, and this is all that is needed in many applications. Additional cameras are useful for cases such as cutting between different cameras in the scene, or when rendering picture in picture or split screen, or when rendering the scene into a texture.

When you add an additional camera, these are the recommended steps: