A Sprite is a 2D graphic that can be rendered into Scene. A Sprite Asset is a reference to a Texture Atlas and a sequence of frames from that atlas. In this way a sprite can either represent a single image (taken out of the atlas) or a flip-book style animation (multiple frames from the atlas). 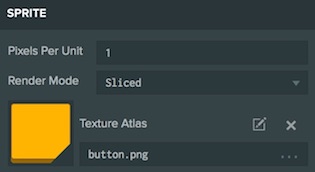 The number of pixels in the sprite image that maps to 1 Unit in the PlayCanvas scene. e.g If pixelsPerUnit is 1 and the sprite is 32x32. Then it will be 32 units across and high when rendered in the scene. By default a sprite with the Simple render mode is created with pixelsPerUnit set to 100. This means that a 100x100 sprite will be 1 unit wide/high in the scene.

If you create a Sliced sprite, by default it will be created with a pixelsPerUnit value of 1. Because these sprites are usually used as part of a Screen Component for building user interfaces, 1 sprite pixel should map to 1 screen pixel.

The Texture Atlas asset that the sprite references